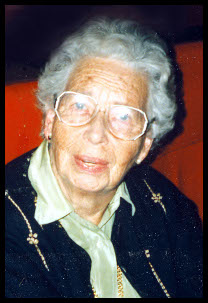 Our dear friend and true member of our BWA-family Kerstin Ruden, Stockholm, Sweden, passed away on 2005 December 26 at the age of 91. Her funeral took place on 2006 January 3 in Kungsholms Baptist Church where she was a member.

Kerstin Ruden was born in 1914 in northern Sweden in a Baptist family. She studied languages and administration in Stockholm before marrying Erik Ruden, a young Baptist pastor who later became a national and international Baptist leader. Their marriage was blessed with four daughters. Their home was characterised by openness and hospitality to guests from near and far.

Kerstin assisted her husband as his private - and unpaid - assistant but she also devoted much time and energy to Christian women's work. She served as secretary of the Swedish Baptist Women's Union SBKF for many years, until a full-time secretary could be employed, and represented SBKF at a number of important international meetings and conferences, starting with the Baptist World Congress in Copenhagen in 1947.

In 1948, Kerstin was present in London when the EBWU was formed and the seeds of the Baptist Women's Day of Prayer were sown. When Erik Ruden became General Secretary of the European Baptist Federation in 1959, the family moved to London. With her husband, Kerstin travelled all over Europe and served as a role model and friend of women everywhere, not least in Eastern Europe. She gathered women in Moscow and helped them become part of the world-wide prayer partnership that joins Baptist women around the world. She was present when Polish women united to form their own organisation and was deeply impressed by their dedication and faith.


During her years in London, Kerstin Ruden became the editor of the women's pages of the EBF newsletter The European Baptist. She first joined the EBWU committee as Secretary in 1962 and served as EBWU President 1972-77. At the BWA Congress in Toronto, Canada, in 1980, she was elected President of the BWA Women's Department and served until 1985. She used her administrative skills to help set up the first Washington office of the Women's Department and she travelled to all continents to meet and encourage Baptist women everywhere. She was the first BWA Women's President to make human rights a priority in her keynote address. Her commitment to the struggle for freedom, justice and world peace never wavered, and up until a few months before her death she was active in a small women's peace group in Stockholm.


Kerstin's last appearance at an EBWU conference was in Prague at the 50th anniversary celebration in 1998. In her speech at the Saturday evening program she rejoiced that the walls of Europe had fallen and women now could meet without barriers.

Kerstin Ruden firmly believed in the right of women to serve God with whatever gifts they had been given. Her life is a powerful and inspiring example of what can happen when women - and men - say yes to God.

Report from the funeral service

We had a good funeral service on 2006 January 3, with a good number of relatives and friends present in spite of the fact that the service took place so soon after the death that many had not been reached with the sad news. The service was held in our church where Kerstin was a member for more than 20 years, the church where I am a member too.

I served in the service as the last gift I could give to the person who has meant so much to me for more than 40 years. She was the one who introduced me to the international Baptist life through introducing me to a very special group of Women leaders visiting our country. There were Marie Mathis, Letha Casassa among those from the WD and Mrs Flugge, Mrs Pepper, dr. Ascolese, Rachel Iversen and others from EBWU. Through some of them I got an offer of a year as scholarship student sponsored by ABC´s Women´s Foreign Mission Society, a year that changed my life more than I then understood.

In my sermon at the funeral I reminded of Psalm 121 which I know that Kerstin loved so much and went back to in the most important moments of her life. She quoted it in Toronto 1980 when she accepted her office as President of BWA Women's Department - and she meditated on it as we then travelled together home in haste as her husband had got a stroke. She was a person always on her way, travelled far often to places in need and brought her message of freedom and peace. She brought hope and courage particularly to groups of women in the former Eastern Europe and was active in their formal organising of a women's work. As her responsibility grew, her trust in God got deeper and deeper. She knew from where she could expect help. Her inner journey continued even when her strength for external travel was insufficient. As late as at the last BWA Congress 2005 in Birmingham some of us reached her by phone and brought her greetings from friends present.

Her family - four daughters and their families - took part at the funeral and one of the grandchildren Karin Lonna shared in the service with her songs. To them all the emptiness will be great when Kerstin is gone. She has daily kept them all in her memory and love.

Some of those who had shared friendship and worked together with Kerstin for many years spoke at the funeral. Dr David Lagergren, former general secretary of the Baptist Union, stressed her courage. Ann-Marie Wessman, a friend since 65 years back and co-worker in women's work in Sweden and still active together with Kerstin in the peace circle, mentioned Kerstins' claim on truth when dealing with complicated issues. A friend from childhood-days in Umea, Gote Aourell, highlighted Kerstin's wide range of gifts for her ministry together with her husband Erik Ruden in the Swedish Baptist Union and then particularly in the divided Europe. Ragni Lantz, until lately secretary of Women's Union in Sweden, spoke of Kerstin as a strong worker for MR-issues and particularly peace. Rev Gunnel Andreasson, chair of Kungsholms Baptist Church and one of the many woman pastors in the Union, talked on Kerstin as one who modelled woman leadership with effect on the Union's policy and one who brought the international Baptist life close to a yonger generation. Sven Ohm, former secretary of the international mission in the Swedish union, spoke of Kerstin as one of those who attended most continental and international Baptist Congresses and took active part in the life and ministry of the world-wide Baptist family.

Much more could be told - greetings received from friends near and far, memorial gifts sent etc. This is for your information as you share in gratefulness and sorrow.