Report of the EBWU Conference in Lyon, France

Short Report of the EBWU Conference in Lyon, France

November 15th-18th, 2012 was the date of this small but nonetheless blessed time in Lyon.

Thirty-one ladies attended from as far north as Norway and as far south as Sicily, as far west as Scotland and as far east as Israel; altogether fourteen countries were represented. The conference was held in Domaine Lyon Saint Joseph where we also stayed.  It was a very comfortable hotel in beautiful surroundings and the weather was kind to us also.  Because it was a small conference we were able to have conversations with most of the participants, getting to know them and sharing with them.

Participants of the conference

The theme of the conference was ‘Train Yourself to be Godly’ (1Timothy 4:7).  Marc Deroeux, the French Baptist General Secretary welcomed us all on the Thursday evening by bringing greetings from the French Baptists and informed us of the situation among Baptists in France.  He also led devotions on how we should live as children of God, to be reactive in prayer and meditation, and to train every day.

Morning devotions were conducted in the small chapel in the hotel.  The main speaker was Ksenija Magda of Croatia.  She took three sessions: ‘The Courage for Godliness’, ‘the Power of Godliness’ and ‘The Hope of Godliness’.  We were challenged afresh to consider our own devotion to the Lord Jesus.  Included in the programme were times of sharing with a representative from each country telling of the women’s work in their own land, as well as sharing and praying in small groups.  We again celebrated the Baptist Day of Prayer, in a visual display.  Each continent’s requests were prayed for and also personal prayer was brought before God, in a very meaningful way.

On Saturday afternoon we enjoyed a walking sight-seeing tour of the old city of Lyon, learning a little about its history and architecture.  We also fitted in a visit to Lyon Baptist Church and were served tea and cakes there.  Due to a demonstration in the town transport was affected, causing us to be delayed in returning to the hotel.  However we still enjoyed the concert arranged for us by Manu Richerd of the Lyon Baptist Church who sang and played his guitar for us; most enjoyable.

Aniko Ujvari led us in a ‘share your talent’ service on the Sunday morning in which a number of the ladies participated in testimony, song, stories, short messages, prayer etc. with Aniko bringing the service and the conference to a close by encouraging us to use the talents God has given us, to shine as His light which is not for us but for Jesus.

Train Yourself to be Godly

A week has passed since the EBWU Conference in Lyon. It was a busy week. Today I am taking time and thinking about what I have brought back that impacts my regular daily life.

On Friday evening Wies Dijkstra was leading us through the Day of Prayer from this year. We were standing in a circle, connecting as we prayed for the requests from women all over the world. When we got to the moment when the offering would be collected Wies suggested that we would not offer only money, but that each person shall think about what she could bring as offering to Jesus. Not a difficult task, I knew right away what I wanted to offer. There were some individually decorated cards on which we could write this to remember.

At home this worked well for they the first day, but already on the second day I missed to do as I had decided. I was about to get upset about myself when a single word popped up in my mind : "TRAINING". What a comfort and encouragement, I do not have to be perfect, neither in my decisions nor my daily life. I have not reached the goal yet, I am in the process of training myself. TRAINING as in trying again, as in failure is human and expected, TRAINING as in focusing on the goal and on Jesus, not on the missed step. Strange enough, the next days were so much easier as I did relax and did as good as I could.

To me encouragement to train myself was the greatest souvenir I brought back from the conference and the wonderful women I met there.

These two days we shared in small groups about what was on our hearts, and about our biggest weakness. For women in leadership this was a great moment of relief to share, and at the same time a great moment of comfort to feel and hear understanding and uplifting words from the others. What a blessing to connect in prayer for one another. 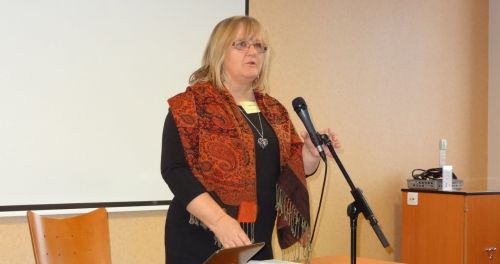 We all may agree that training ourselves is a good thing to do, but it takes strength and discipline and time. So what gives us the necessary drive? Ksenija Magda, a teacher for New Testament at the Theological Seminary in Croatia took us through scripture pointing out the courage, the power and the hope of Godliness. These Bible studies were a profound and practical encouragement I can remember as I am training myself to be godly at home, at my job and in the assignments in church.

I am training, I probably will not win the next "Olympic games" but I am on my way with determination, with my eyes aligned on Jesus, and with a uplifting smile when I or others miss it.

My impressions from EBWU Conference in Lyon

Here are my impressions from the EBWU Conference in Lyon, France from 15th to 18th November 2012. Elisabeth Kapsreiter, President of the German Frauenwerk and I, Gisela Bullermann Vice President, attended the conference.

We flew from different airports in Germany and met each other at Lyon airport. Tabitha from the IBC (International Baptist Church) in Germany was also waiting for us there. Our accommodation, Domaine St. Joseph, was a few miles away at the other side of Lyon. We could either take a taxi or go by public transport. We thought it would be more interesting and exciting to go by public transport. First we took a train, the Rhone-Express, from the airport to the metro station. There we changed to the metro, then we took a bus and then we walked a little bit. It took us about 2 hours in total and we were quite proud of ourselves to have managed it.

Built in 1928 by Lyon`s Diocese, Domaine Saint Joseph was a seminary for training young priests. With 5 hectares of park and a beautiful view over the Mont du Lyonnais hills, it was the perfect place to learn about philosophy.

It was nice to meet and greet all the 30 women from 15 different countries. We exchanged kisses and big hugs. Some of the women knew each other from other meetings or conferences. The topic of the conference was “Train yourself to be godly”.

Ksenija Magda from Croatia was the main speaker taking Bible studies during the three days. She gave us some new, profound insights into the Bible verses. The women told each other about their work in their home countries, about their successes and their needs. In small groups we could open our hearts and pray personally for each woman and ask for God’s blessing.

Twice, we could use the small chapel in the building where we were staying. The chapel was styled in a modern way with golden colours. This was a special place for me for adoration. Angela from Italy, who was a professional opera singer, sang a worship song in this chapel and touched our hearts.

A special event was the Saturday afternoon with a local guide who showed us the old city of Lyon. Lyon has long been very famous for producing and trading silk, from the past until the present day.

We visited the Baptist church in Lyon where we were welcomed by the pastor, his wife and some young girls who offered us some refreshments, coffee and cakes.

That day, there was a big demonstration in Lyon and there was a strong police presence in the city. In the evening, Elisabeth and I went for a little walk through the shopping streets and wanted to go back by bus by ourselves. But, because of the demonstration, the buses weren’t running and we didn’t know how to get back to our hotel. The first taxi driver didn’t understand us which was good, because later we tried to take a bus again and at that time the normal traffic was moving.

In the evening we listened to Emmanuel Rechard. He is a student of theology, a song writer and singer. He sang his worship songs on his guitar with passion and the lyrics moved us in a certain way. One of his songs was created especially for the Ecumenical Day of Prayer, which was prepared by women in France and will be celebrated on the first Friday in March 2013.

Before we said goodbye, we made sure to arrange to meet each other in May 2013 at the big conference in Hanover, Germany where the topic is “Stand up and live”