From March 19th-24th 2013 the EBWU Committee met together in Durres, Albania. We had previously been invited to come for our committee meetings and also to meet with the women there. We were accommodated in the Child Evangelism Fellowship hostel in Durres and looked after very well there, particularly by Barna Kovacs.

As is our normal custom, we spent three days attending to EBWU business. Reports were given by the office-bearers and by the News & Views editors; reports of the various countries were also heard; project funding was considered; other items of business dealt with. Quite a bit of the time was spent in making preparations for our five-yearly conference in Hannover, Germany. Each morning and evening we began and closed respectively with devotions from God’s Word and times of prayer.

On Wednesday morning two Albanian sisters, Shqiponja Lamce and Blerta Myrteza came from Tirana to meet with us. We talked about the women’s conference on Saturday morning and we also learned something of the work being done by the Baptist women around the country. In Tirana a number of women are involved in prison ministry where they visit women prisoners and share God’s love with them and also hold Bible studies for any who wish to join with them. There is also a work being done among the Roma children in the north of the country where a nursery has been organised for these little ones. Again in Tirana the women meet every second Saturday morning for prayer and for Bible study and there is also a similar group meeting on a weekly basis among college age women.

Livija Godina, EBWU president with Adriana - a missionary from Brazil

The weather was beautiful – warm and sunny (only one day of rain) and those of us from colder climates appreciated the heat. It seemed a pity that we were indoors most of the time, however at lunchtime we usually managed a short walk and one afternoon we ventured as far as the market.

Ann Roberts from Wales, who was formerly working in Albania

As already mentioned we were driven by Barna Kovacs and Lluka Sema to Tirana on Saturday morning to the Baptist church there for the women’s conference, the theme of which was taken from Romans 12:1-3, mainly ‘Do not be conformed to the world but be transformed by the renewing of your mind’. Around thirty women were expected but the church was packed with approximately sixty women in attendance. It was wonderful to share with our Albanian sisters in praise, prayer and worship. From each of the churches represented at the conference one of their number spoke of what God was enabling them to do with regard to the work amongst women and children. The work is varied with Bible studies, prayer, teaching on health topics, work in the neighbourhoods, church planting, children’s work, prison work etc. There are many needs, with few workers but God is at work. Using the women as they are obedient to Him, they experience the grace of God which enables them to persevere. Ann Roberts from Wales was there; she was instrumental in the beginning of the women’s work in Albania and she shared in the meeting, giving thanks to God for the desire among the women to share Jesus, for their testimonies of God’s provision, for their faithfulness, for their dependence on God day by day, for lives transformed by the love of Jesus.

Each member of the EBWU Committee was given the opportunity of sharing a little of the work done by the committee and then Livija Godina spoke from Romans 12:1-3. She spoke of freedom, how to live in freedom. Materialism can come into the church and there are many, many lies. People want, they get, but they can’t pay back. But, our trust is in the Lord, and this has totally changed our lives, not our surroundings but our hearts and our attitudes. Renew your mind. The mind controls the body. Conform is to be moulded or stamped to a pattern. If you do not stand against, you will be conformed. JB Philips translates our theme as ‘don’t let the world squeeze you into its mould.’ There is much danger in thinking as the world does. If we want something get it; if people can’t do anything for us, don’t bother with them; live for the moment, never mind the consequences; don’t let anyone push us around; take what we want. We must not be shaped by these things; we must fight against self, sin and Satan. Livija asked us to think about how we spend our time, what books we read, what TV programmes we watch. These verses speak to all of us – one bad apple in the box affects the whole lot, causing decay. We are dependent on each other. It is important not to go with the flow but as God’s people to be different, to stand up against the grain. The tadpole becomes a frog, the caterpillar becomes a butterfly, both are changed, transformed. That is what God wants for us – to be transformed. This change comes about when we train ourselves to be godly, read God’s Word, memorise it, keep it in our hearts, meet often with God and with His people, be still and know that He is God. There is no separate physical and spiritual life. God is all to us. Often we search for God’s will but if we don’t conform to the world but instead are transformed our minds will know God’s will for us – obedience when God speaks to us, humility as we carry out His desire and love for God, for one another, for all.

Following the conference the church provided a substantial lunch for all who attended. It was lovely to eat it outside in the open air in the yard belonging to the church. It was also good to be able to mix with the ladies and to have conversation with them. God was among us and He surely blessed us.

Later in the afternoon, Barna and Lluka took us to the mountains where we rode in a cable car to great heights. At the top we could look down on the city and see the extent of it and also see the beautiful scenery and again worship the Lord for the magnificence of His creation. Our time in Albania was very worthwhile and encouraging for the Albanian women and for us. 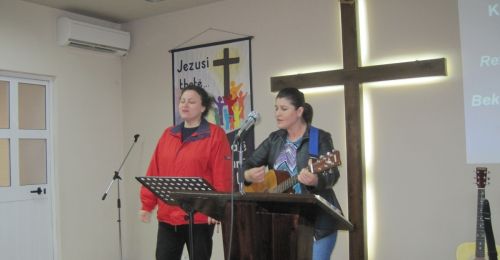